Commodores break even at round robin, get set to host 1st-place Pirates 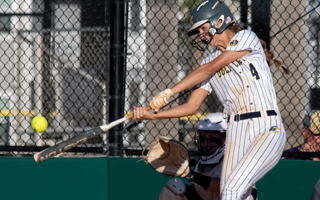 The first day of the Panhandle Conference-opening round robin event at Frank Brown Park on Saturday was pretty frustrating for Gulf Coast. After dropping their opener 4-2 to Tallahassee, the Commodores dropped their second game 1-0 to No. 12 Pensacola State despite getting a gem of a pitching performance from ace GraceAnne Spears.

Thanks to a walk-off RBI single by Jaylyn Baker and another terrific performance in the circle from Spears on Sunday, Gulf Coast was able to salvage the weekend with a 2-2 split with wins of 6-5 over No. 17 Northwest Florida State and 5-1 over No. 7 Chipola.

Gulf Coast (31-7 overall, 2-2 in the Panhandle Conference) now sits in a three-way tie for second place in the league standings with Chipola and Northwest Florida State, one game ahead of last-place Tallahasssee at 1-3 and one behind first-place Pensacola State at 3-1.

One thing is for sure after the opening weekend of Panhandle Conference play, it's going to be a long and arduous journey to determining a conference champion.

"I'll tell you what, if you're watching all of the games, I think the biggest thing you see is that we're just very even as a conference and just very good, which I already pretty much knew," Gulf Coast coach Scot Thomas said. "It kind of impresses you to watch that caliber of play at this level for sure.

"It's about what I thought it was, but to see everybody kind of in the same place, it kind of fortified what we were already thinking. I talked to a couple of the other coaches and they all said the same thing. It's fun, but it's tough. If you like competition this is where you want to be. If you're afraid of competition you better stay away because everybody in this league can play."

The Commodores were riding a 12-game winning streak into the weekend, which was capped off with a doubleheader sweep over No. 1 Florida Southwestern. As encouraging as the sweep of the nation's top-ranked team was, it was also a source of anxiety for Thomas going into conference play.

"I was worried going into it after the big wins we had that we'd kind of have a hangover day and we sort of did," he said. "We just didn't hit the ball. We tip our hats to the Tallahassee pitcher and Pensacola too. We just weren't able to put anything meaningful together with runners on. We left a lot of runners on base Saturday. We weren't really striking out that much, but we couldn't seem to get the big hit.

"I liked the way the kids responded on Sunday to come back and get two solid wins over Northwest and Chipola. I thought that showed a lot of character with our team and it was a great little tournament. All five of us can play, it's a tough league."

Spears makes a statement
Perhaps the most encouraging development from the weekend was their opponents' ability to do much of anything against the Commodores' ace.

The sophomore Spears made three appearances on the weekend and earned two victories, retiring one batter via strikeout in the top of the seventh inning against the Raiders before the Commodores walked it off in the home half, and pitching complete games against Pensacola State and Chipola.

"GraceAnne threw great," Thomas said. "She just threw really, really well, and I think obviously by now the word is out on her. Everybody knows who's got great pitching. She's leading the nation in strikeouts, I think she's second in ERA, but she threw great, really all of our pitchers did."

Recently:What we learned: 3 takeaways from Commodores' 10-6 loss to Northwest

The staff finished with a 1.75 ERA over the four games, with five errors accounting for eight unearned runs allowed. Spears ran her national-best strikeout total to 158, which is 15 better than anyone else in JUCO softball, while dropping her ERA to 0.92, which ranks 13th among all pitchers but first for pitchers who have thrown 100 or more innings and fourth among those with 50-plus innings.

'A huge opportunity'
Gulf Coast will get back at it Tuesday evening in its Panhandle Conference home opener at Joe Tom King Field with a doubleheader against Pensacola State.

With a sweep, the Commodores could take over first place in the conference, or at least stay a game out with a split.

"It's a huge opportunity for us," Thomas said. "They're very good, just solid all over. Of course, our first game with them was that 1-0 ballgame, so we'll see. We've got to take care of business for sure."