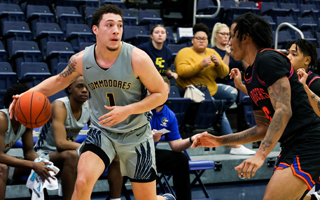 The Gulf Coast men's basketball team picked up a much-needed 81-68 road victory over Pensacola State on Thursday night, while the No. 19 Commodore women suffered a heartbreaking 72-71 overtime loss to the No. 16 Pirates.

In the men's game, Chase Forte led the way for Gulf Coast (12-6 overall, 1-1 in the Panhandle Conference) with 16 points and eight assists, followed by Alex Matthews with 15 points, Kyle Murphy with 11 points, and Simeon German with 10 points.

The Pirates took a 42-39 advantage into the break, but the Commodores opened the second half with a 17-6 run and added another 14-4 surge to blow the game open and extend the lead to 14 points.

It was Forte and Murphy who did all the damage in the latter run, with Murphy scoring eight points and knocking in a pair of 3-pointers while Forte scored on a floater and a driving layup to make it 72-58 with six minutes to play.

GC women lose late lead
The Gulf Coast women missed a golden opportunity to even up their record following a Panhandle Conference opening loss to No. 1 Northwest Florida State on Tuesday, surrendering a six-point lead in the final minute of regulation.

With the loss, the Commodores fell to 11-6 overall and 0-2 in the Panhandle Conference with a home game against No. 6 Chipola on Wednesday. It was the league opener for the Pirates (13-1), who will next play at Chipola on Saturday.

Tai'Sheka Porchia was the top scorer for the Pirates with 17 points and 14 rebounds, followed by Zahra Daniel with 14 points, Caliana Fenceroy with 13 points, and Kristin Williams with eight points.

Gulf Coast fell behind by as much 11 in the first half and trailed 44-36 at the break before pulling to within three in the third and taking the lead 58-57 on a driving layup by Robinson with 7:07 left in the fourth.

Another tough driving banker by Boyd gave Gulf Coast a 65-59 advantage with 1:38 to play, and the Commodores maintained that six-point edge with possession and 1:07 to go after a defensive stop.

But a turnover gave it back to the Pirates, who cut the deficit in half on a three-point play from Fenceroy with 41.7 seconds on the clock. The Commodores then took a surprisingly quick shot on the next possession, a missed Abby Cracknell three from the right wing, and the Pirates rushed back up the court and got a tying 3-pointer from Williams with 22.7 seconds remaining.

Downs missed a baseline jumper on the last possession of regulation, with the teams twice trading baskets in the overtime period before Daniel drew a foul with 6 seconds left and made the second of two free throws to give Pensacola State the lead.

Boyd got a good look at a mid-range jumper on Gulf Coast's final possession but couldn't get it to go.