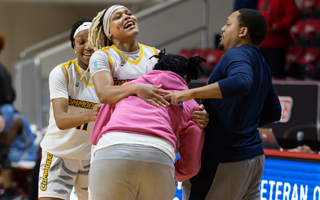 Neither Gulf Coast coach Rory Kuhn nor Chipola coach Greg Franklin were entirely sure why their teams needed to play a one-game playoff in Niceville on Tuesday night to break their second-place tie at 7-5 in the Panhandle Conference standings.

Both teams were already headed back to Niceville next week for the state tournament, with Tuesday's game only serving to determine which team would get the No. 2 seed.

Ironically, Gulf Coast's 74-73 overtime victory may have pushed the teams closer to another meeting on the same court next week, which would be the fifth of the season, should each club win their tournament opener.

On the bright side for coach Rory Kuhn's Commodores, should that potential fifth meeting go Chipola's way, Tuesday's win, Gulf Coast's third in four tries against the No. 14 Indians, would all but assure the Commodores of an at-large bid to the national tournament.

"Yeah, at least for the national tournament beating them three out of four really looks good and helps a lot," Kuhn said. "But it just felt weird. I think both teams in the first half felt like we shouldn't even be playing the game. We were both like, this is weird. I think when we went on a run in the third quarter and went up 11, that's when they started picking up their intensity and then it became like a playoff feel game from that point on.

"But it definitely felt weird to be playing on a Tuesday in a game we probably shouldn't have been playing."

Morgan Robinson-Nwagwu led the Commodores (19-9 overall, 8-5 in the Panhandle) with 20 points, 11 rebounds, and five assists, while Imani Smith added 18 points, and Abby Cracknell had 11 points and eight rebounds.

Gulf Coast also got good contributions from their center duo of Ava Miller and Musharapha Alhassan, who combined for 15 points and 18 rebounds. For the game, the Commodores outscored the Indians 50-33, which helped offset Gulf Coast's 30 turnovers compared to just 17 for Chipola (22-7, 7-6).

It also helped that Gulf Coast was plus-16 at the free throw line, making 27 of 40 from the charity stripe compared to 11 of 25 for Chipola. Two missed free throws by the Indians late in overtime set the stage for Smith's game-winning free throw to put Gulf Coast up by a point with 1.3 seconds remaining.

While the game might not have been the prettiest, or even necessary in the coaches' eyes, Kuhn said the win and the second-place finish were a point of pride for himself and his players, particularly given the circumstances of Kuhn taking over late in the summer and getting a late start on putting the roster together.

"We feel great about it, it's a culmination of things," he said. "You think about where we started at the beginning of the year, it's like I told them after the Tallahassee game (in the regular season finale), you think about Chipola and Northwest and Pensacola and how long those teams have been together, some of those players have been together for three years or two years or even just one year, and we've been together for basically five months and we just finished second in the best conference in the country, which is pretty damn good. They're definitely proud of it and they deserve it."