Commodore men try to 'set the tone' vs. No. 4 Raiders 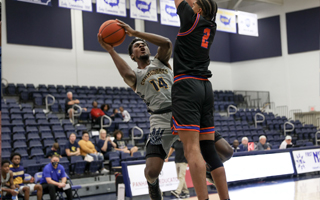 After an up-and-down run through the pre-conference schedule, Gulf Coast (11-5) opens Panhandle Conference play on Tuesday night against No. 4 Northwest Florida State (16-1) at the Billy Harrison Field House.

For most teams, opening up the league schedule against one of the nation's premier teams at home would be preferable to doing so on the road, though for the Commodores, the Field House has been more like a house of horrors so far this season.

While Gulf Coast has been very good on the road, posting a 10-2 record with multiple victories over nationally-ranked teams, the Commodores have posted just one home win this season, a narrow six-point victory over Florida Coastal Prep in the season opener.

Gulf Coast spent the next 10 games on the road before returning home to lose two games to South Georgia Tech and No. 18 Florida Southwestern, and then returned from the Christmas break last week to suffer a third straight home defeat, 72-64 at the hands of coach Phil Gaffney's former school Georgia Highlands.

Having trouble winning at home is a bad problem to have going into league play in the toughest conference in the country, so if the Commodores are to have any hope of getting through to the postseason, it's an issue they'll need to fix immediately.

On the other end, the Raiders come in with a 7-1 record away from home, having suffered their only loss of the season 79-75 to Indian River State in St. Petersburg on Nov. 13. Northwest has won 13 straight since then by an average margin of 22.4 points per game.

The Raiders have been dominant this season under new coach Greg Heiar, who returned to the Panhandle Conference after a dominant run through the league at Chipola that featured five straight league titles in the 2000s.

Washington leads the Raiders with 9.5 rebounds and 4.8 assists per game and is one of five Northwest players averaging double-figure points (10.2) per contest.

"They're loaded," Gaffney said of the Raiders. "Washington is a great passer, a good shooter, a great rebounder, he's the key to their team, but they're also very balanced. They've got five guys averaging between 10 and 12.6 points and that's amazing that you can have a team like that.

"They do a phenomenal job and they have good depth off the bench and Heiar has them playing with energy and passion."

The Raiders are one of the two Panhandle teams ranked in the national poll along with Chipola (14-2) at No. 6. While everyone starts off even at the beginning of conference play, Gaffney said there's no doubt about the teams that everyone in the league is chasing now.

"There's no question Chipola and Northwest are the two best teams in the conference," he said. "They've both lost just one game and they're really good, but Tallahassee is also 15-3 and (Pensacola) lost a bunch of games early but they're coming back now and winning, so we really have our work cut out for us.

"That's why it's really important for us to set the tone this week against Northwest and Pensacola (on Thursday). If you can beat a top-five team in the country and then win at Pensacola and go into the bye week before Chipola, now you feel great about yourself. If you lose both and then you've got to get ready to play Chipola down 0-2, you feel awful. I know it sounds ridiculous, but these first two games are really important for our season so we really need to come out and play well."

Matthews makes a difference
While the Commodores lost their first game back from the holiday break, there was a silver lining with the debut of Evansville transfer Alex Matthews in his first game since gaining eligibility.

The versatile 6-foot-5 forward scored 12 points, but it was his all-around contributions that Gaffney said will be important for the Commodores going forward.

"Alex was tremendous, he was great, if anything he should've shot the ball more than he did," Gaffney said. "He's such a glue guy. He can make shots, he's good on defense, he's a good passer, he rebounds, he defends, he goes inside and goes outside. For his first game, he was just tremendous. Now we need him to have a great second game, a great third game, and a great fourth game. He might not be a guy who gives you 20 (points) and 10 (rebounds) like a Cam Holden, but he might be a guy who can go inside and outside for us."

Gulf Coast also got 6-foot-6 Valparaiso transfer Goodnews Kpegeol back after a foot injury sidelined him for nearly three months, though he struggled in his return and went scoreless against Georgia Highlands.

With the addition of those two come the potential loss of two more players, with starting power forward and top rebounder Tay Hall out indefinitely with a sprained ankle and third-leading scorer Jammy Pierre-Louis questionable for Tuesday's game with an ankle injury of his own.