What we learned: 3 takeaways from Gulf Coast's loss to No. 1 Northwest 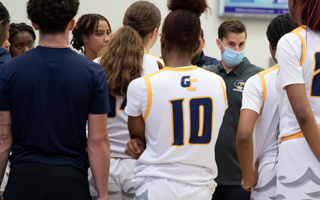 PANAMA CITY — Leading 60-59 with just under five minutes left, No. 19 Gulf Coast had a golden opportunity to get a signature victory in its Panhandle Conference opener against No. 1 Northwest Florida State.

The Raiders, however, had other ideas, scoring six straight points and making 7 of 7 free throws down the stretch to escape the Billy Harrison Field House with a 74-68 victory Tuesday night in a hard-fought battle between two of the nation's best teams.

"They got a couple of cheap rebounds, we came up short on the offensive end, and obviously Poa I don't think missed a foul shot, maybe she missed one," Gulf Coast coach Rory Kuhn said about the decisive stretch of play in the fourth quarter. "They were making their free throws, we extended the game as much as we could, but we just couldn't get over the top. We needed them to miss a free throw or two and catch a lucky break but we couldn't catch one."

Ciante Downs and Imani Smith each scored 12 points while Anaya Boyd added 10 points for the Commodores (11-5), who will have a quick turnaround before getting back into Panhandle play with a Thursday road game against Pensacola State.

Northwest Florida State will also be back at it on Thursday when it hosts No. 2 Chipola, which won its league opener Tuesday night 75-52 over Tallahassee.

The Brown and Poa takeover
Northwest Florida State sports one of the most balanced offensive attacks in JUCO basketball with eight players averaging between six and 13 points per game this season, but on Tuesday night it was the dynamic duo of Brown and Poa that carried the Raiders on their backs.

Brown and Poa accounted for 70 percent of the Raiders' offense, with Poa scoring 19 of her points in the second half, knocking in a pair of threes and converting 11 of 12 from the free throw line, including 8 of 8 in the fourth quarter.

Brown posted 15 points and nine rebounds in the second half, with the 5-foot-11 forward punishing small-ball Commodore lineups in the paint with an array of post-ups and put-backs, with an offensive rebound and bucket plus the foul giving the Raiders a 70-65 lead and essentially putting the game away with 28.5 seconds to play.

"She killed us on the glass," Kuhn said of Brown. "She was really good, she was tough, she gave them that spark. We knew she was tough and we matched her energy at times but not enough."

Living at the line
Poa wasn't the only player who made a home at the free throw line Tuesday night. Robinson also got to the charity stripe 18 times and made 16 to post her ninth 20-point game of the season.

The sophomore point guard is among the nation's leaders in free throw attempts at 7.9 per game. Robinson was especially effective when Kuhn went to a smaller, center-less lineup in the second quarter and she scored nine points to help spark an 18-4 Commodore run.

Robinson continued to attack the Raiders' typically stingy defense off the dribble throughout the second half and earned her way to the line 12 more times.

"That's why I was trying to spread the floor and let her get to the rim because they couldn't keep her out of the paint," Kuhn said. "She did a good job of getting there and carrying us, but other players need to step up and we didn't do that enough tonight."

Quick to forget
The Commodores certainly had their opportunities to pull off the upset, holding the lead on two separate occasions in the fourth quarter and having a 3-point attempt by Anaya Boyd to grab another while down two with just under a minute to play.

The good news is that Gulf Coast won't have long to linger on the loss with another conference games just two days away, though Kuhn tried to keep Tuesday's defeat in perspective.

"I don't think it was a missed opportunity at all," he said. "They're No. 1 for a reason. We gave them pretty much all they can handle, we just came up short tonight. The best part is you get to play them two more games. We've just got to figure it out and have a short-term memory because we have to go play Pensacola on Thursday."

The No. 16 Pirates (12-1) were the only Panhandle team that didn't play on Tuesday and will go into Thursday with five days rest compared to just one for the Commodores. With a home matchup with No. 6 Chipola looming next week, Gulf Coast can ill afford an 0-2 start to the conference slate.

"Well, you can't, but anything is possible," Kuhn said of starting 0-2. "You certainly can if you're not prepared and ready to go. That's why you have to have a short-term memory and be ready to go on Thursday."